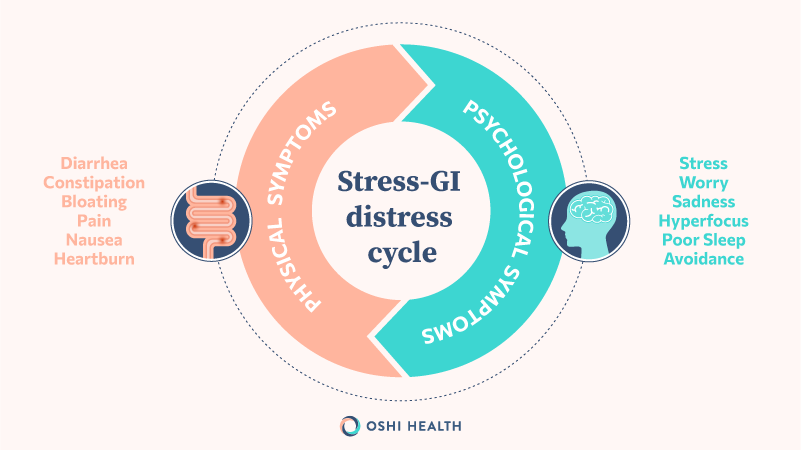 The gut and the brain communicate back and forth via the vagus nerve, which runs from the brain to the large intestine. However, signals from the gut can also operate independently to influence and control our digestive tract – especially during times of stress.

And, people living with ongoing GI symptoms may actually be more susceptible to the effects of stress than the general population.

Environmental factors such as physical and emotional stress early in life also have potential impacts on how the gut’s nervous system (ENS) develops and on its lifelong physiological function. These factors can lead to GI dysfunction developing, even later in life.

In other words, stress and digestive distress can become a vicious cycle.

Fight or flight vs. rest and digest

One example of how the brain and gut are connected is the “fight or flight” reaction. When we experience big emotional shifts such as fear, anxiety, or even excitement, a cascade response happens in the body. During a fight or flight reaction, you may feel heart rate and blood pressure increase while your breathing becomes faster and shallower.

Because the body focuses on warding off a perceived threat, it conserves energy in other ways. For example, the gut’s nervous system (known as the enteric nervous system, or ENS) slows digestion in response to stress, resulting in abdominal discomfort, pain, and sometimes even feelings of urgency.

Over time, a heightened response to stress can cause:

To counteract this natural stress response, we need to activate our body’s opposing system – the relaxation response via the parasympathetic nervous system, which is known as our “rest and digest” state.

We can begin to train the body to proactively activate this state, even in stressful situations.

Read more about the gut-brain connection and evidence-based therapies to influence this communication for GI symptom relief.